Cryptoassets And The Macroeconomy 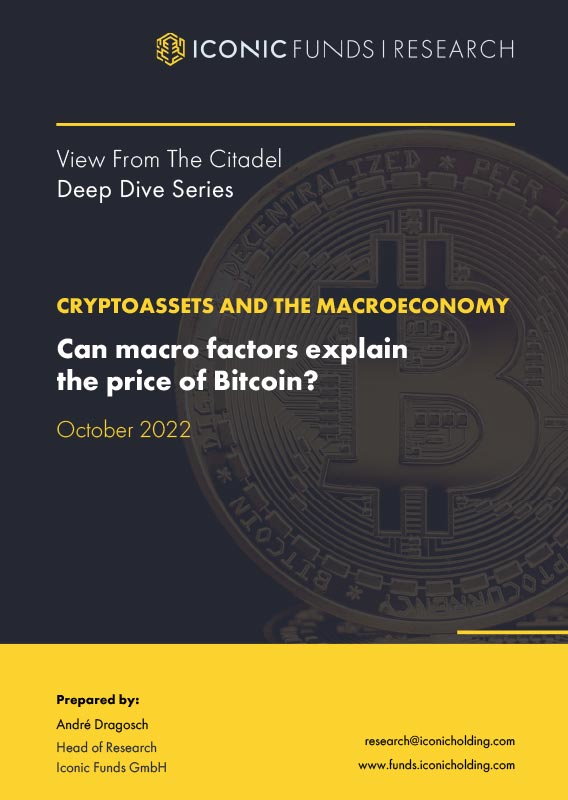 Cryptoassets And The Macroeconomy

Bitcoin as an asset
Bitcoin is primarily an asset which rather appears to be sensitive to
gyrations in global growth prospects than to changes in monetary policy
or any other macro factor.

Introduction
Which macro variables have recently been influencing the price of Bitcoin is a topic of continuing
discussion in the cryptoasset community. Some contend that Bitcoin is just another “risk-on” trade
like any other and that its value has a strong correlation with equity prices. There is some truth to
that, as Bitcoin is currently still one of the most volatile financial instruments. In fact, similar to the
S&P 500, Bitcoin sold off during the Covid-shock in February/March 2020, recovered similarly,
and has been trading downwards in a similar fashion since the beginning of this year (see chart
N1).
The “money printer” argument is also used by many experts to claim that monetary policy has
been the only game in town for Bitcoin. In fact, it seems that this year, both Bitcoin and the real
interest yield on US Treasuries have been strongly correlated (see chart N2).

Other market observers have claimed that the Dollar itself has been one of the key determinants of
Bitcoin’s performance, especially in 2022. The logic behind that argument is that Dollar
appreciation puts pressure on the Bitcoin exchange rate since Bitcoin is denominated in fiat
currency like the Dollar. Dollar appreciation also indirectly implies an increasing scarcity of Dollars
relative to other major fiat currencies such as the Euro or Yen, so that this increasing scarcity might
affect the exchange rate between Bitcoin and the Dollar to some extent (see chart N3).
Statistically speaking all the abovementioned correlations may be true at the same time since a
third unobserved factor may have a simultaneous impact on stocks, fixed income, fiat currencies
and Bitcoin.
In order to shed more light on this ongoing discussion, we will try to clarify how to quantify the
macro elements that account for most financial market fluctuations and how these macro factors
can account for the price of Bitcoin in the next section.

Which macro factors
‘explain’ financial markets
in general?
We discuss a statistical technique called “Principal Component Analysis” (PCA), which can distill
the complexity of financial markets down to a handful of common factors that can account for the
bulk of price movements. The key to PCA’s effectiveness is that these variables are largely
uncorrelated with one another, allowing us to “filter out” frequent changes in financial market
prices and concentrate on variables that are actually unique.
We will use 30 separate daily closing prices from a variety of asset classes, including equities,
corporate credit, sovereign bonds, foreign exchange, and commodities, to achieve this. All time
series used in this article were obtained from Bloomberg. For the purpose of ensuring stationarity
and comparability among the variables, we apply a 1-year rolling standard deviation (z-score)
to these market prices.
According to the findings, the first four primary components can already account for around 2/3
of the changes in these 30 financial market variables. As a result, we only decreased explanatory
power by a third while reducing the entire dataset from 30 to 4 variables. We could calculate
more components, but we’ll stop at these first four because each additional factor has a smaller
marginal impact on the overall explanatory power.
The challenging issue is now how to group these several fundamental components into macro
factors.
The fact that the classification of the many principle components involves some interpretation is
one of the limitations of PCA. In order to make a factor more understandable, a researcher is
frequently compelled to rotate the factor’s algebraic sign (also known as “factor rotation”). The
following charts display the respective R2 for the first four principal components (PCs 1 through
PC4) and the most significant market factors, respectively.

The US Cyclicals vs. Defensives Equity Sector appears
to be connected with the first principal component
(PC1), as does a variety of other ‘growth-sensitive’
assets such as US High yield vs Investment Grade Bond
Performance. We simply refer to this macro factor as
“Global Growth” because it demonstrates substantial
covariation with key macro indicators like the ISM
Manufacturing New Export Orders.

We simply refer to this factor as “Monetary Policy”
because the second principal component (PC2)
appears to be connected with assets that are often
sensitive to changes in (US) monetary policy, such as
EM Sovereign Bonds or Gold. The change in real US
bond yields, which is typically a reliable indicator of US
monetary policy, exhibits strong covariation with this
feature as well.

We simply refer to the third principal component (PC3)
as “US Dollar” because it seems to be primarily
connected with exchange rates like the EUR/USD or the
Dollar Index (DXY).

We simply refer to this factor as “Eurozone Risk” because
the fourth and final principal component (PC4) appears
to be tied to factors that potentially signal risks
associated with a breakup of the European Monetary
Union, such as Italian Sovereign Spreads or the
CHF/GBP exchange rate.

We can also extract an overall cross asset risk
sentiment inherent in the 30 market variables
by imposing coefficient sign restrictions onto
the individual variables based on whether an
increase of that variable signals an increase or
a decrease in risk appetite. For instance, an
increase in the VIX usually signals a decrease
in risk appetite which is why the VIX enters with
a negative coefficient. On the other hand, an
outperformance of financials vs consumer
staples stocks usually signals an increase in
risk appetite which is why this relative
performance enters with a positive coefficient.
The resulting metric also exhibits a close
correlation to the performance of Bitcoin.
As expected, an increase in cross asset risk
sentiment usually coincides with a positive
performance of Bitcoin and vice versa.

Which macro factors
‘explain’ Bitcoin?
We can finally compare the variations of the macro factors with the price of Bitcoin now that
we have calculated the various macro components.
Before we proceed, it is crucial to understand that correlations are dynamic, i.e., they vary
over time, rather than static. To capitalize on this idea of time-varying correlations among
variables, researchers frequently use the word “regimes.”
Bitcoin is no different. The analysis that follows will demonstrate different correlations over
different time periods, which is also consistent with observations made by the cryptocurrency
community that Bitcoin occasionally “behaves” more like a Tech stock (rallying with increasing
risk appetite) and occasionally more like a safe-haven asset like Gold (rallyes with falling risk
appetite).
Let’s first examine the so-called rolling partial R2 of the aforementioned macro factors in
relation to the price of Bitcoin. The composite BTC/USD exchange rate retrieved via
Bloomberg is used in this analysis. The percentage of a Bitcoin price movement that can be
accounted for solely by a macro factor is known as partial R2. Simply said, rolling indicates
that we are looking at a moving time window (in this case 120 business days). This is what we
get:

As was already mentioned, the degree to which a single macro factor affects the price of Bitcoin
changes over time and is never constant. There are however times when the majority of the
variation in the price of Bitcoin cannot be attributed to these large-scale variables alone (such as
the end of 2021), which is depicted by the light gray area in the “Residual” column. We don’t
know for sure, but these are possibly the times when Bitcoin was more susceptible to cryptospecific factors. For instance, from mid-2021 to late-2021, Bitcoin started to enter the bear
market due to idosyncratic factors such as the China mining ban and the fact that Tesla
discontinued accepting Bitcoin for its car purchases. These events were mostly uncorrelated to
either changes of our four macro factors.
Nonetheless, from January 2015 until today, these four macro factors may already account for
c. 83% of the changes in the price of Bitcoin which supports the notion of Bitcoin being a macro
asset.
The more recent history shows that Bitcoin variations were mainly associated with changes in
“Monetary Policy”. Note that the Beta, ie the sensitivity of Bitcoin to that macro factor, is positive,
and that the “Monetary Policy” macro factor itself is negative [Chart N9]. Hence, tightening in
monetary policy was associated with a decrease in the price of Bitcoin.
We will further explore the investment implications of that situation in the upcoming monthly
report.

This report analyzed the statistical influence of macro factors
on the price of Bitcoin. In order to do so, we have utilized a
Principal Component Analysis (PCA) in order to extract 4
latent macro factors from 30 financial market variables.
These four latent macro factors are already able to explain
approximately 83% of Bitcoin price variations in the period
from January 2015 until October 2022, hence supporting
the notion of Bitcoin being a macro asset.
Overall, Bitcoin is primarily an asset which rather appears to
be sensitive to gyrations in global growth prospects (full
sample R2 ~50%) than to changes in monetary policy (full
sample R2 ~23%) and appears to be highly correlated to
overall changes in cross asset risk sentiment.
Recently, tight monetary policy has indeed been the most
dominant macro factor for Bitcoin in 2022.

This website uses cookies to improve your experience while you navigate through the website. Out of these, the cookies that are categorized as necessary are stored on your browser as they are essential for the working of basic functionalities of the website. We also use third-party cookies that help us analyze and understand how you use this website. These cookies will be stored in your browser only with your consent. You also have the option to opt-out of these cookies. But opting out of some of these cookies may affect your browsing experience.
Necessary Always Enabled
Necessary cookies are absolutely essential for the website to function properly. These cookies ensure basic functionalities and security features of the website, anonymously.
Functional
Functional cookies help to perform certain functionalities like sharing the content of the website on social media platforms, collect feedbacks, and other third-party features.
Performance
Performance cookies are used to understand and analyze the key performance indexes of the website which helps in delivering a better user experience for the visitors.
Analytics
Analytical cookies are used to understand how visitors interact with the website. These cookies help provide information on metrics the number of visitors, bounce rate, traffic source, etc.
Advertisement
Advertisement cookies are used to provide visitors with relevant ads and marketing campaigns. These cookies track visitors across websites and collect information to provide customized ads.
Others
Other uncategorized cookies are those that are being analyzed and have not been classified into a category as yet.
SAVE & ACCEPT
Scroll Up